List of Top Smartest Pet Birds Ever You Can Keep

Research performed by a team of scientists established that the brains of the smartest pet birds, especially those of parrots and singing birds have a higher amount of neurons in the pallium. It is the area of ​​the brain which contains the best cognitive abilities, like finding patterns or making plans.

Well, the macaw’s brain has more neurons in this pallium area associated with intelligent behavior. However, their brain is more than smaller than the macaque. One surprising fun fact is that the common pigeons accumulate more neurons in their brain. Not everything is to have a big-sized brain to have intelligence. 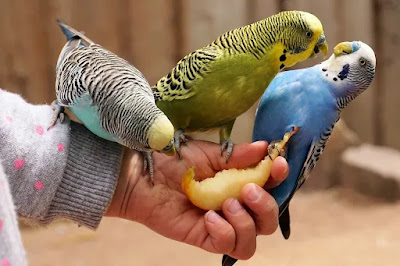 They are popularly known as Lovebirds or birds of love in every country. They are named so because they prefer to live as a couple. They are able to learn and repeat short words and sounds. They can emit whistles as well.

Scientists discovered in studies that pigeons are able to categorize objects by doing some mental operation exactly to what children do while they learn the words.

In the United Kingdom, there is a highly curious anecdote about this bird, at the time of distributing milk around the houses, the Tits learned to identify the milk bottles by the lid color and feed on them.

If you place a mirror in front of this bird, it can recognize itself. In an experiment made by some researchers, they placed a few colored stickers on the throat of several magpies which were standing in front of a mirror. While looking in the mirror that was placed in front of them, the magpies were trying to take off the stickers. They easily recognized their own reflection!

The Chinese fishermen are accompanied by the cormorant birds, who offer them the eighth fish of those who manage to achieve as a treat or reward. The cormorant birds know how to count numbers up to eight and they refuse to continue collaborating with the fishermen while fishing once they get their prize going on to fish for their own benefit.

When macaws reach their seventh month of life then they are able to repeat words which they can understand more or less what they are being told.

Crows are really very intelligent birds. They are able to solve problems logically, build tools, memorize, even remember and distinguish other people and crows. A study shows that these birds can solve the same puzzle that a seven-year-old child would solve.

Ravens belong to the exact biological group as crows and they are simply smart. These birds are also as playful as the crows, however, cooperative hunters that often perform their work in pairs. Ravens are able to solve complex problems and understand causes.

They travel in pairs, one distracts their prey while the other gets the food (another animal or egg). Ravens have inborn cognitive intelligence. See how PBS highlights how smart ravens are.

A group of scientists studied from the University of Oxford, the Max Planck Institute in Germany, and Vienna proved that to obtain a reward cockatoos could solve a problem. In that process, they are being very innovative and have the patience to achieve their goal. They even learn from each other in that process.

In the Avian Learning Experiment, the grey parrot Alex was the subject matter of scientific study, in which the parrot showed that those of his species could decide at a primary level which words to use and use frequently used words creatively and consciously.

The Kea or Nestor notabilis is a large-sized green-colored parrot. This bird is known to be the most intelligent bird in the world. It is named after the sound it emits when it flies and it comes from the South Island in New Zealand.

To get food, the kea is able to use objects of nature, to solve issues after a previous analysis of the environment, and to achieve what is proposed they act in groups.

Not each and every bird is smart. The brain of some birds will not develop as much as others. They are not so intelligent and therefore will not be able to learn as fast as some other birds such as Macaws for example.

You have to start off with a pet bird that has the capability and power to learn. From that part on it’s all down to how much effort and time you put into your bird’s training.

If you spend 30 to 45 minutes per day you will have your smartest pet birds swearing within no time at all, it’s guaranteed.

When possible, Cage Heaven uses affiliate links (at no additional cost to you). Being a participant in the Amazon Services LLC Associates Program and different affiliated websites, we earn fees through qualifying purchases.